Senior staff at First Glasgow’s Dumbarton depot were delighted to 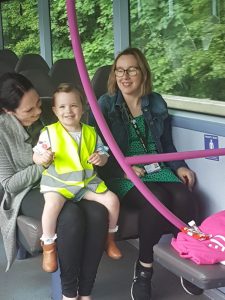 assist West Dunbartonshire Council with their request to help them with a special 3-year-old girl named Rachel. Rachel is partially blind and had some serious confidence issues regarding using Public Transport.

Rachel would get very upset and stressed when a bus would approach, and she would refuse to board. Her parents’ main concern was that she was about to start nursery after the Summer holidays, and she would miss out on day trips with her friends due to her condition. Initially, when the team met Rachel, she still had the same fear, and simply refused to board the bus, even with engine switched off and got upset with her mother.

Rachel’s mother was ready to admit defeat at that point and even apologised to the team for wasting their time, stating that she would just have to try and persevere until she could get over her fear.

Robert Boyle, of the Dumbarton depot operations team then informed Rachel and her family that the team would not give up and would take it in small steps every few weeks to try and build up her confidence.

After weeks of perseverance on the part of the team and Rachel’s family, we are delighted to report that Rachel is now a fully-fledged bus passenger. She is now, not only able to board Public Transport without fear, but the team were even able to take her on her own exclusive a trip around the local area, which she absolutely loved.