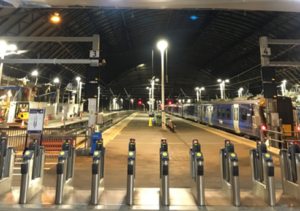 Queen street station continues to be re-developed. In February and March 2020, there are a number of changes that are due to take place in the station layout:

28th January to 23rd February – access to/from platforms 8 and 9, via Platform 2, will be closed overnight, Sundays to Thursdays from 8pm to 5.30am.

Access from the Low Level to the High Level will be via the lifts on platforms 8 and 9, and also the stairs at the North Hanover Street entrance.

4th February – the recently installed, new Customer Information Screens (CIS) above the central gateline will ‘go live’. During a period of transition, the existing CIS screens at the east side of the station will remain in use until the 8th February.

14th to 16th February – seven gates to the left side of central gateline (when entering/accessing from the main concourse on to the platform area) will be out of use to allow the completion of tiling.

During this time, access to the Upper Level platforms will be via the remaining gates to the right side of the central gateline, as well as the new gateline at the Dundas Street side and also the existing gateline near the North Hanover Street entrance.

29th February to 2nd March – seven gates to the right side of central gateline will close during floor tiling work. Access to Upper Level platforms will be available via the remaining open gates left of the central gateline, the new gateline at the Dundas Street side and also the existing gateline near the North Hanover Street entrance.